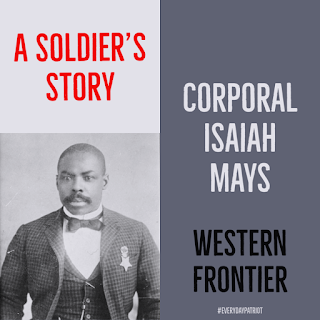 Corporal Isaiah Mays was born on February 16, 1858, as an enslaved person, in Carter's Bridge Virginia.

He enlisted in the US Army in September 1881 and was assigned to the 24th Infantry and sent to Arizona Territory.

Corporal Mays earned a Congressional Medal of Honor during the Wham Paymaster Robbery.  On May 11, 1889, Corporal Mays was assigned to the security detail that was moving payroll from Fort Grant to Fort Thomas.   They were attacked by a group of eleven men.  Corporal Mays would, under fire, crawl over the desert territory to get reinforcements.

After his contract ended in September of 1893 and he retired from the military, he would remain in the West, working as a general laborer in Arizona Territory.  He fell ill in 1922 and would enter the Arizona State Hospital, dying there in 1925.

Corporal Mays was originally interred in the hospital's cemetery, but on May 29, 2009, the Old Guard Riders re-interred him in Arlington Cemetery with full military honors.