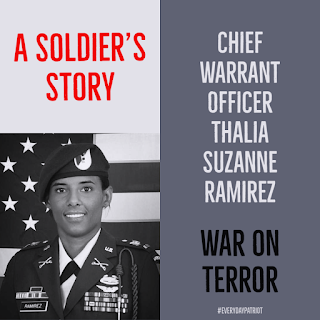 Chief Warrant Officer Thalia Suzanne Ramirez was born on May 15, 1984, and spent most of her childhood in Kenya, where she attended the Braeburn academy.

She enlisted in the US Army, shortly after repatriating in Texas.  Initially, she trained in Water treatment but would switch careers and enter the cavalry, after training to be a helicopter pilot.

She was an avid Call of Duty player.

Chief Warrant Officer Ramirez deployed to the Logar providence of Afghanistan and on September 5, 2012, her Kiowa helicopter crashed after taking fire.

She rests at Arlington.