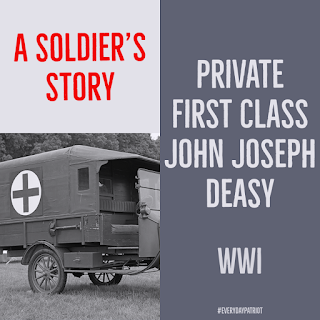 He immigrated to the United States and began working at the Blair County Hospital as an attendant.  He enlisted in the US Army on April 3, 1918, and deployed to France.

PFC Deasy was assigned to the 320th Ambulance CO of the 80th Division and would carry wounded out of the Meuse-Argonne, the Artois Sector, and St. Mehiel until his discharge on June 9, 1919.

After the war, he would work as a policeman.