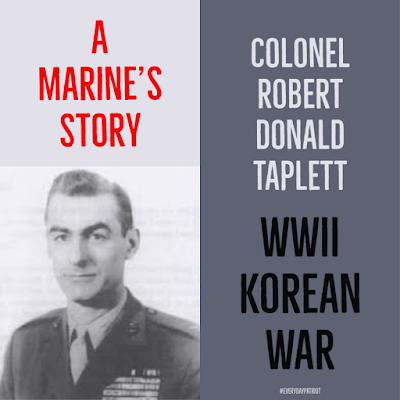 Colonel Robert Donald Taplett was born on December 10, 1918, in Tyndall South Dakota.  He graduated from the University of South Dakota and he was a member of Phi Delta Theta and the US Army ROTC.  After his graduation in 1940, he chose to resign his Army commission and joined the US Marine Corps as a Second Lieutenant instead.
Colonel Taplett was assigned to the USS Salt Lake City and was berthed in Pearl Harbor on December 7, 1941.  The USS Salt Lake City was one of the few ships not disabled during the initial attacks and was able to pursue the Japanese fleet.  Colonel Taplett would spend the war at sea in the Pacific aboard the USS Salt Lake City and participated in the Battle of the Coral Sea, The Battle of the Aleutian Islands, and provided ship to shore fire support for the battles of Iwo Jima and Okinawa.
After the war, Colonel Taplett would serve as the commanding officer of the Naval Supply Barracks in Clearfield, then as the commanding officer of the barracks in San Francisco and finally the Alameda barracks before returning to combat duty during the Korean War.
Colonel Taplett would deploy to Korea as soon as hostilities broke out as the commanding officer of the 3rd Battalion, 5th Marines. He and his units would be responsible for holding the perimeter at Pusan. Colonel Taplett also led the landing at Inchon, as well as the subsequent battle.  He led troops through the gates of Seoul and earned a Navy cross during the Battle of Chosin Reservoir when he and his men fought to keep the road open for troop withdrawal.
After the Korean War, Colonel Taplett became the academic director at the Basic School at Quantico before assignment to commanding positions at the barracks in Hawaii and Okinawa and the Philippines.  Colonel Taplett also served as a guest lecturer for training before he retired from the Marine Corps in 1960.
After his retirement, Colonel Taplett moved to Arlington and earned a Master's degree from George Washington University.  He chose to remain in government service and worked with the US Postal Service before retiring completely in 1993.
During his retirement, he would travel to Korea twice and write a book about his experiences called "Darkhorse Six - A Memoir of the Korean War."
Colonel Robert Donald Taplett died on December 17, 2004, and rests in Arlington National Cemetery.
Biography Korea Marines WWII
Location: Tyndall, SD 57066, USA