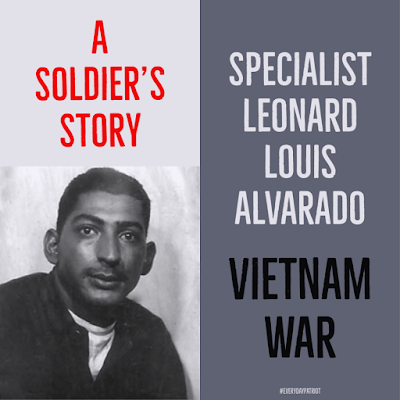 Specialist Leonard Luis Alvarado was born on February 13, 1947, in Bakersfield California.  He graduated from East Bakersfield High School and enlisted in the US Army shortly after graduation, in 1968.

He deployed to Vietnam with the 12th Calvary and would earn a Congressional Medal of Honor on August 12, 1969, while his unit was on route to aid another platoon in the Phuoc Long Province.  His unit came under attack and Specialist Alvarado returned fire and kept up a steady rate of suppressive fire, in spite of receiving wounds that would prove fatal, and allowed his unit to withdraw.

Specialist Alvarado rests at the Greenlawn Cemetery in Bakersfield California.