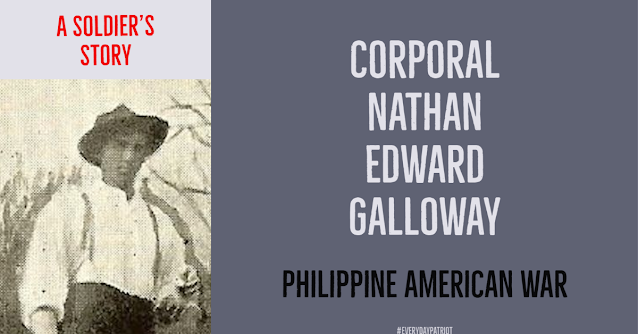 Corporal Nathan Edward Galloway was born on February 18, 1879, in Springfield Missouri, and in his early years would carve buttons out of mussel shells for his mother.  He enlisted in the US Army on May 30, 1901, was assigned to the 28th Infantry and deployed to the Philippines during the Phillippine American war.
After he returned home in 1904, Corporal Galloway supported himself and his wife with farming and also began selling carved wooden furniture and trinkets.  He maintained an art studio in Springfield Missouri and was preparing for his worldwide artistic debut at the 1915 Panama Pacific International Exposition, when, on July 18, 1913, a fire engulfed most of a Springfield city block, including his art studio.
After the fire, Corporal Galloway took a job at Charles Page's Sand Springs Boys home, in Sand Springs Oklahoma, where he taught woodworking skills to the boys. He remained a teacher until his retirement in 1937.
Corporal Galloway moved to a small farm in  Foyil Oklahoma, where he opened another woodcarving workshop, making trinkets and violins.  He also created several totem poles, including one that reached 90 feet. The totem poles and woodshop became a popular tourist stop along US highway 66.
Corporal Nathan Edward Galloway died on November 29, 1962, and rests in the Chelsea Cemetery in Chelsea Oklahoma.
*Note - Not all of his Springfield work was destroyed.  There is one piece, called "Lion in a Cage" that is known to exist.  It can be found at the Dickerson Park Zoo in Springfield Missouri.
Labels: Army Philippine-American War
Location: Springfield, MO, USA