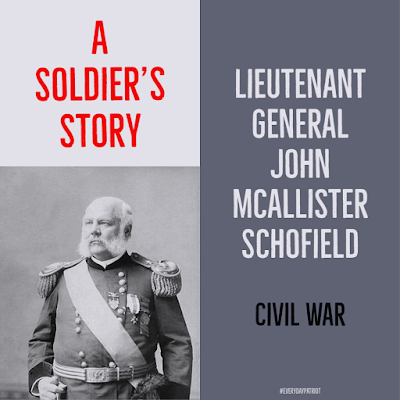 Lieutenant General John McAllister Schofield was born on September 29, 1831, in Gerry New York, while young, his family moved to Freeport Illinois where he graduated from local public schools.  After graduation, General McAllister briefly worked as a school teacher and helped with the family farm. He also surveyed parts of Northern Wisconsin before receiving his appointment to the US Military Academy at West Point in 1849, he graduated in 1853.
He was briefly assigned to Fort Moultrie South Carolina before heading to Florida to guard US assets there during the truce before the Third Seminole War. General Schofield was evacuated after catching a tropical fever (probably malaria) and dysentery.
General Schofield would return to West Point to teach philosophy and, feeling like his career had stalled, took a brief leave of absence to teach physics in St. Louis at Washington University.  He returned to active duty with the 1st Missouri Infantry at the beginning of the Civil War.
He earned a Medal of Honor during the Battle of Wilson's Creek and led the unit that routed Confederates during the First Battle of Newtonia. He also commanded units that held Arkansas territory.  General Schofield also participated in the wartime government of Missouri, the Battle of Franklin, the Battle of Nashville, and the Atlanta Campaign.  He was the commander of the troops which occupied Wilmington. 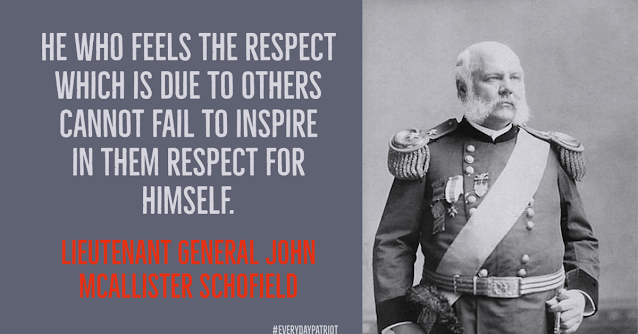 After the US Civil War, he would undertake a diplomatic mission to France and became the military governor of Virginia during the state's constitutional convention.  He would then assigned to the position of the US Secretary of War. Afterward, he returned to active troop command, first as the commander of the Department of Missouri, then as the commander of the Military Division of the Pacific.
General Schofield returned to West Point once again, this time as the superintendent.  After several years, he moved back to active troop command, commanding the Gulf Division, the Pacific Division, the Missouri Division, and finally the Atlantic division before accepting his final post, the Commanding General Of the US Army.
General Schofield retired from the US Army on September 29, 1895, and wrote his memoir Forty-Six Years in the Army. He would also remain active in the fraternal order The Military Order of the Loyal Legion of the US until his death on March 4, 1906.
He rests at Arlington.
Labels: Army Civil War Congressional Medal Of Honor Western Frontier
Location: Gerry, NY 14740, USA