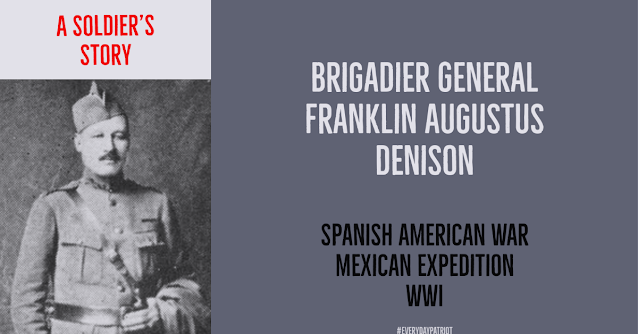 Brigadier General Franklin Augustus Denison was born in about 1862, in San Antonio Texas.  He and his family relocated to the Chicago Illinois area while he was young.  He graduated from Lincoln University in 1888 and in 1890, graduated from Northwestern University with a degree in law.

Brigadier General Denison worked as the Assistant Attorney General of Illinois in 1891 and assisted in the creation of the 8th Infantry Regiment of the Illinois National Guard, a unique unit at the time, as it was one of the only African American units to be commanded by other African Americans.  Brigadier General Denison deployed to Cuba with the 8th Illinois during the Spanish American War, where he was, because of his fluency in Spanish, President of General Courtmartial.

After the war, Brigadier General Denison was assigned Chief Quartermaster of the 4th Brigade before taking an assignment commanding the 3rd Battalion.  He was then sent to Fort Sam Houston to guard the Mexican-American Border during the Mexican Expedition.

With the outset of WWI, the 8th Illinois was renumbered to the 370th Infantry.  Brigadier General deployed to France, laying the groundwork for the Argonne Offensive, returning stateside prior to the battle. In 1918, he would become the first African American to rise above the rank of Colonel.

Brigadier General Franklin Augustus Denison retired from the US Army in 1922 and died on April 14, 1932. He rests at the Oakwoods Cemetery in Chicago Illinois.