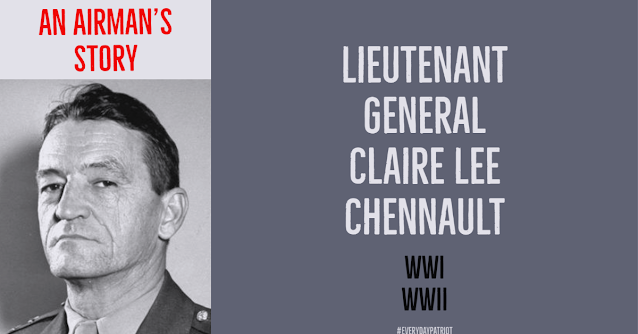 After college he worked as the principal of the Kilbourne School, and, at the beginning of WWI, he left the reserves and enlisted active duty. He completed his Officer's training at Fort Benning and assigned to the Army Air Service and where he was taught to fly.

Lieutenant General Chennault resigned from the US Air Force in 1937, due to lingering health issues and career stagnation. The Chinese recruited him to train Chinese pilots and when the Second Sino-Japanese War erupted in 1937, he became the Chief Advisor to the Chinese Air Force. 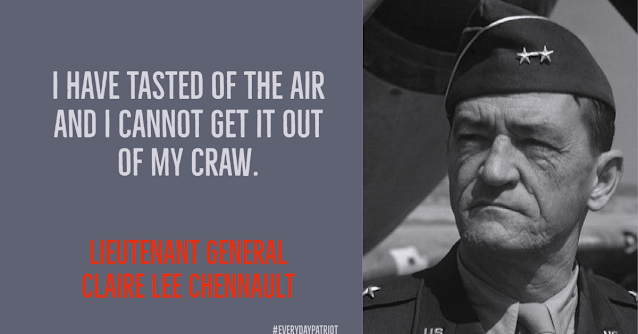 While on a fundraising trip to San Francisco and with Chinese General Pang-Tzu Mow, he began the creation of an all-volunteer American group of pilots and aircraft mechanics, and in August of 1941, the "Flying Tigers" began flying out of Rangoon, Burma, and Kunming.

The Flying Tigers were absorbed by the US military in February 1942 and Lieutenant General Chennault became the commander of the 14th Air Force. He would also be featured on the cover of Time Magazine's December 1943 edition. He retired from the US Air Force in June of 1945.

After his retirement, Lieutenant General Chennault returned to China and founded another aircrew, this one called the Civilian Air Transport, also known as Air America, to help aid the Nationalist Chinese against the Chinese Communist Party.

Lieutenant General Chennault published his memoir, Way of the Figher in 1949, the same year he had to leave China after the Nationalist Fighters fell to the Communist Party and he spent many months of his retirement testifying before Senate Committees about the Chinese Communists and their impact.