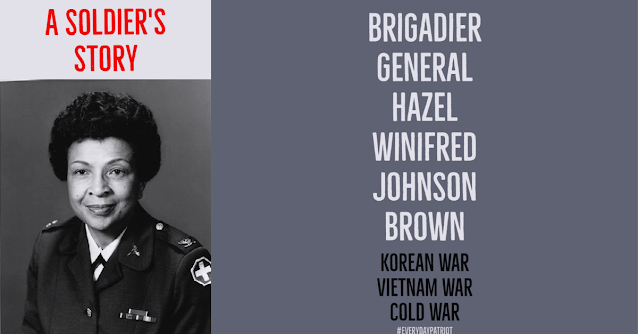 Brigadier General Hazel Winifred Johnson-Brown was born on October 10, 1927, in West Chester Pennsylvania. She graduated from Tredyffrin East down Senior High School. She struggled initially finding placement in her secondary education, she wanted to be a nurse, but the West Chester School of Nursing was not accepting African Americans during this period of time, and so, Brigadier General Johnson-Brown had to relocate to New York in order to attend the Harlem School of Nursing. She graduated in 1950 and spent several years working in the Harlem Emergency room before she enlisted in the US Army in 1955.

Brigadier General Johnson-Brown was initially assigned to nursing and training posts at 8169th hospital in Japan, at Walter Reid Medical Center, and at Fort Sam Houston. She also continued her education during this period, earning a Bachelors's degree in Nursing from Villanova in 1959 and a Master's degree in Nursing Education from Columbia University in 1963. 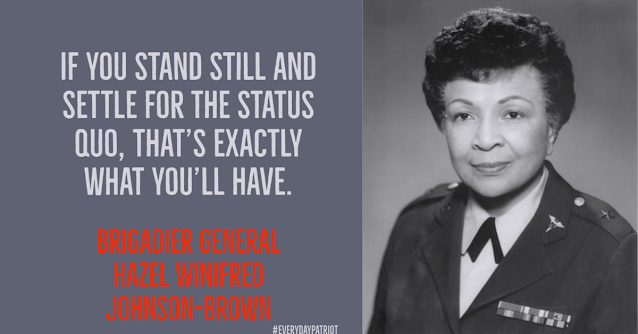 Her first major command post was to the US Army's Medical Research and Development Command as a Project Director for Field Hospital and after Brigadier General Johnson-Brown earned a Doctorate degree in Educational Administration from Catholic University, she was assigned, to Director positions at Walter Reid, 8th Army Command, and the 121st evac hospital in Seoul. Ebony magazine predicted, in 1977, that she would be the first African American Woman General, a feat she accomplished in 1979 when she was appointed the Chief of US Army Nursing Corps. Brigadier General Johnson-Brown was also the Associate Dean at the University of Maryland School of Nursing. Her courses were focused primarily on Military nursing students deploying overseas.

Brigadier General Hazel Johnson-Brown retired from active duty in 1983 and kept busy as an adjunct professor of nursing at George Mason University, the Director of Government Affairs for the American Nursing Association, and aided in the founding the Center For Health Policy