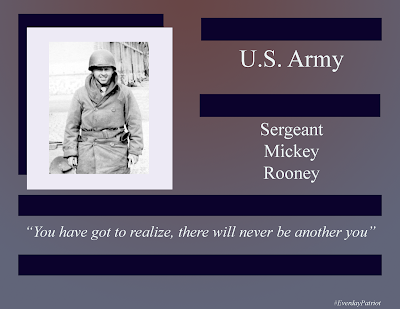 Born Joseph Yule Jr, on September 20, 1920, in Brooklyn, New York, Sergeant Mickey Rooney appeared in his first film, Not to be Trusted, shortly after he and his mother relocated to Hollywood, California in 1925.

Throughout his childhood and teenage years, Sergeant Mickey Rooney became well known for his role as "Mickey McGuire" and "Andy Hardy' and appeared on the cover of  Time Magazine in 1940.

In 1944 he enlisted in the U.S. Army and was assigned to troop entertainment, spending 21 months touring, and earning a Bronze Star for his performances in combat zones.

After the war, he began transitioning more toward T.V. and Broadway, creating the Mickey Rooney Show (also called Hey Mulligan), he even appeared in one of  Rod Serling's Twilight Zone episodes.


Sergeant Mickey Rooney was best friends with Judy Garland, who he met during the filming of Thoroughbreds Don't Cry.  He had an 86 year career in film and has three stars on the Hollywood Walk of Fame.


He loved music, American football, golf, horse racing (he was often cast as a jockey), painting, and classic movies.

Sergeant Mickey Rooney wrote two books, The Search for Sonny Skies, a novel, and Life is too Short a memoir.

He died on April 6, 2014, at the age of 93 (with three projects in the works) and rests in the Hollywood Forever Cemetery.
Labels: Army Biography WWII
Location: Hollywood, Los Angeles, CA, USA