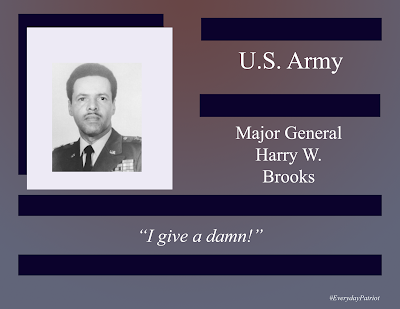 Major General Harry W. Brooks was born on May 17, 1928, in Indianapolis, Indiana.

A graduate of Crispus Attucks High School, General Brooks was also active in ROTC during high school and after his graduation, enlisted in the U.S. Army.

Major General Harry W Brooks's career, like that of General Fox Conner, is noted for his mentorship. Major General Brooks took many soldiers, including Collin Powell, under his wing, and, while the commanding general of the 25th Infantry Division, ordered more than 10,000 soldiers to return to school to finish their educations.

General Brooks also co-authored The Gathering Storm: An Analysis of Racial Instability Within the Army.

After his retirement in 1976, General Brooks focused on corporate achievement.  His company, Advanced Consumer Marketing Corp was noted as the Department of Commerce Minority Business Enterprise of the Year 1989, and the Black Enterprise Company of the Year 1990.

His civilian life also included many hours of service, as he was an active Rotarian, Mason, and Shriner.