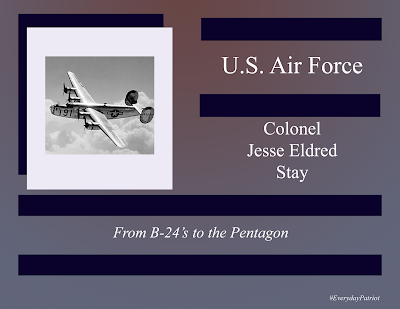 Colonel Jesse Eldred Stay was born on July 20, 1921, in Draper, Utah.  He briefly attended college at UCLA, in pre-med, supporting himself while working at the California Furniture Factory, before leaving school to enlist in the U.S. Army Air Forces.

He was initially assigned to fly B-17's before being reassigned to the B-24 Liberators and sent for a 29-month assignment in the Pacific, in which he flew reconnaissance and bombardment missions, including well-known battles, such as the attack on Wake Island, and Iwo Jima, and remained relatively unscathed.

Colonel Stay remained with the US Air Force post-war, finishing his degree, this time in Industrial Management, at UCLA before being assigned to the Pentagon, first with the Office of the Secretary, then with the Press Office.  Throughout the subsequent years, he was assigned to posts in the Strategic Command and Information Services and once, received for him, a very choice assignment, as the Commander of the ROTC at Brigham Young University (Colonel Stay was a lifelong active member of the Church of Jesus Christ of Latter-Day Saints) before he retired in 1968.

After retirement, he worked briefly with the Church College in Hawaii before accepting a position at Brigham Young University and its motion picture studio, where he led the production of church films.