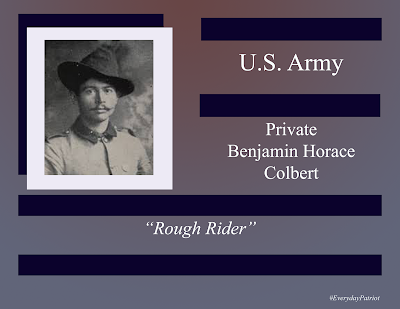 Private Benjamin Horace Colbert was born in 1873, in Colbert, Oklahoma.

On May 23, 1898, he enlisted in the US Army and deployed with the 1st US Volunteer Cavalry, also known as the "Rough Riders", famously led by Colonel Theodore Roosevelt.

During his deployment, Private Colbert would participate in the Landing at Daquiri and the Battle of Las Guasimas.  He left behind a journal of his experiences, the first entry was titled "The experiences of a Redman with Roosevelt and his Rough Riders" (Private Colbert was a member of the Chickasaw tribe).

After the war, he was appointed U.S Marshall for the southern district of the Indian Territory and was an active Mason and Shriner.