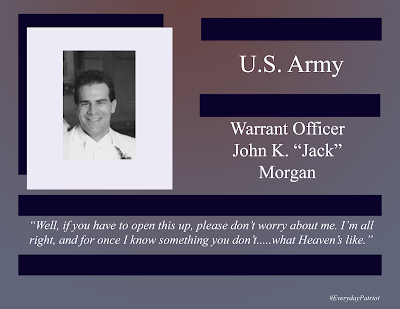 After graduating from Interlake High School in 1981, he enlisted in the US Navy and served a term as an Electricians Mate.

Warrant Officer Morgan briefly worked as an account representative for an investment firm before decided to return to the military, this time to the US Army, where he earned his helicopter pilot certification in 1989.

He deployed to the Middle East in the Fall of 1990 and On February 27, 1991, the helicopter Warrant Officer Jack Morgan was piloting was shot down.  He rests at the Sunset Hills Memorial Park in Bellevue Washington.