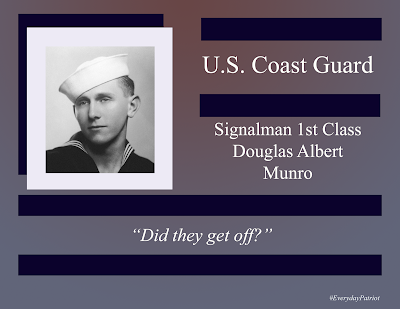 Signalman 1st Class Douglas Albert Munro was born on October 11, 1919, in Vancouver British Columbia.  His father repatriated to America while he was young and Signalman Munro would grow up in South Cle Elum Washington.

He was musically talented, playing the drums, trumpet, and harmonica, and he regularly performed with the Sons of the American Legion Drum and Bugle Corps.  Signalman Munro was also a boy scout and wrestled for Cle Elum High School.

After graduation, he enrolled in Central Washington College of Education but withdrew in 1939 to enlist in the US Coast Guard when WWII beginning to look likely, it was at his induction ceremony that he would meet and befriend Commander Raymond Evans.  The two would become known as "the Gold Dust Twins".

After his training at Port Angeles Air Station, he was assigned to the USCGC Spencer until 1941 when the US Coast Guard was transferred from the Department of the Treasury to the Department of the Navy.  The Gold Dust Twins volunteered for reassignment aboard the USS Hunter Liggett, where they were tasked with troop-carrying, search and rescue, and ship to shore communications.  The pair would also train sailors for small boats in anticipation of the Guadalcanal campaign.

Signalman Munro would transfer to the USS McCawley and assigned to ferry troops and manage ship to shore radio.   Signalman Munro and Commander Evans would also operate a small Naval Operating Base on Guadalcanal and assist with the search and rescue efforts there.

On September 27, 1942, he earned a Congressional Medal of Honor during the attack on the Matanikau River. Signalman Munro was assigned with ferrying troops and when the Marines were overrun, Signalman Munro used a 30 caliber machine gun to clear a path for the Marines to escape.  When one of the evacuation boats beached on a sandbar, Signalman Munro moved his boat between the sandbar and enemy fire, returning fire until the boats were all free.  He was mortally wounded by enemy fire. His final words were "Did they all get off?" (They did).