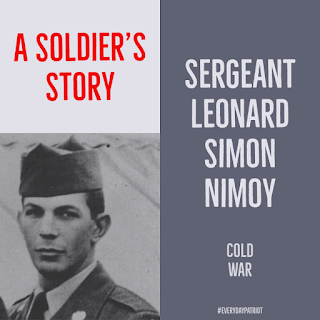 Sergeant Leonard Simon Nimoy was born on March 26, 1931, in Boston Massachuttes.   He was always very industrious, selling newspapers and cards as well as shining shoes while he was growing up. He also began performing in theater while still in grade school.

He would continue in his goal to be an actor, although his parents wished that he would have attended college.

Sergeant Nimoy's officially launched his acting career at the age of 17, when he took on the role of Ralphie, from Awake and Sing by Clifford Odets.

He would perfect his craft through acting classes at Boston College and the Pasadena Playhouse, although, after enrolling in Konstantin Stanislavsky's courses, Sergeant Nimoy became a committed method actor.

In 1953 he enlisted in the US Army Reserves and was assigned to the Special Services unit where he was charged with creating shows and events for troop entertainment.  Sergeant Nimoy finished his contract honorably in 1955.

He returned to acting after his discharge, taking on roles in B-Movies and regularly taking guest spots on shows like Perry Mason, Dragnet, Sea Hunt, Wagon Train, and The Twilight Zone before landing his signature role, that of the Vulcan Science Officer S'chn T'gai Spock, in Gene Roddenberry's  Star Trek series. Sergeant Nimoy would play this character throughout his entire career. 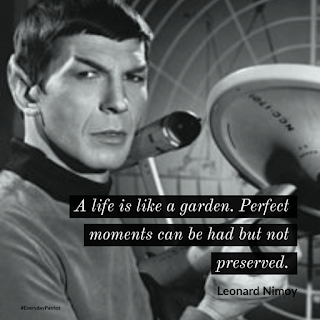 In addition to his role in the Star Trek series and its subsequent movies, animated series, video games, and other Spock appearances, Sergeant Nimoy continued to take on other projects, appearing several other TV series, including Mission Impossible, Night Gallery and Columbo.  He also accepted a role in the western production Catlow.  He would appear as the host on shows such as Ripley's World of the Unexplained, Paranormal Investigators, and Ancient Mysteries.  Sergeant Nimoy also maintained an active stage career, with performances in Fiddler on the Roof, One Flew Over the Cuckoo's Nest, and Equus. Sergeant Nimoy was also an active narrator and voice actor.  He would even throw his hat into children's TV by hosting Nickelodeon's Standby... Lights! Camera! Action!

His final tweet was "A life is like a garden. Perfect moments can be had,  but not preserved, except in memory."