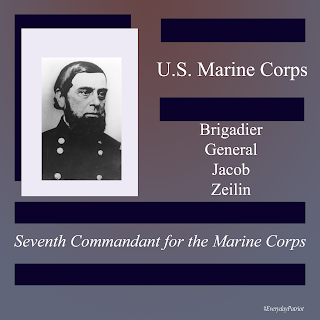 He attended the US Military Academy from 1822 to 1825 but left prior to his graduation and wouldn't be commissioned into the US Marine Corps until October 1, 1831.

Brigadier General Zeilin patrolled to Brazil and along the coast of South American before moving to the USS Congress in 1845 to support the Mexican American war.

He participated in the Conquest of California, the action at San Gabriel River, the Capture of Los Angeles, and the Battle of La Mesa.  He was briefly assigned the Commandant of San Diego before he returned to Mexico for the capture of the Guaymas and Mazatlan.

Brigadier General Zeilin would then be assigned to the Perry Expedition and landed with Commodore Matthew Perry during his mission to Japan.

He served shore duty at Norfolk, Washington, and Wabash until the beginning of the Civil War. Brigadier General Zeilin initially commanded the barracks of Philadelphia and D.C until July of 1861, where he commanded the Union Marine Forces during the Battle of Bull Run,  and where he was slightly wounded.  He would next be assigned to a yard in New Hampshire.

On July 10, 1864, he would be appointed "Colonel Commandant" of the US Marines and on March 2, 1867, promoted to General.  It was Brigadier General Jacob Zeilin that approved the Eagle, Globe, and Anchor emblem of the Marine Corps.

He retired from service on November 1, 1876, and died on November 18, 1880.  Brigadier General Jacob Zeilin rests in the Laurell Hill Cemetary in Philadephia Pennsylvania.