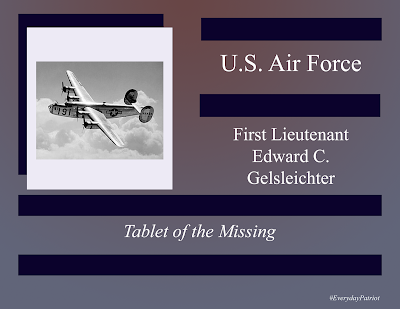 Prior to the onset of WWII, he worked in Schenectady, New York as a carpenter, enlisting in the U.S. Army Air Corps on December 16, 1942.

Trained as a bombardier, he was assigned to the 431st Bomber Squadron,  11th Bomber Group and deployed to the Pacific theater.

On July 28, 1944,  the B24J,  #42-73018, that First Lieutenant Gelsleichter was serving aboard was last seen in flames and crashing into the Pacific off the coast of Truk.   None of the airmen were recovered.

First Lieutenant Edward C. Gelsleichter is memorialized on the Tablet of the Missing at the Manila American Cemetery and Memorial.