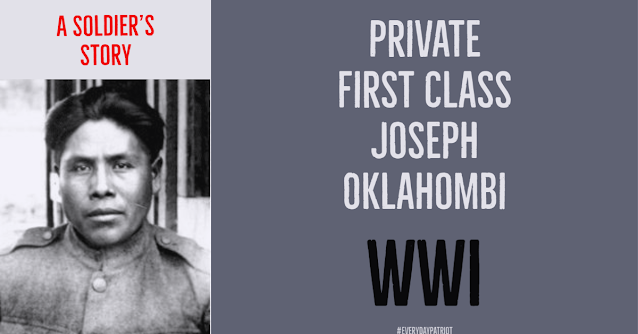 Charley Jones. the historian of the Choctaw nation, tells us that Pushmataha, a Choctaw chief from the early 1800s, once predicted that the Choctaw war cry would be heard in a foreign land.

It is remarkable that PFC Oklahombi (as well as other Choctaw tribal members) enlisted at all.  The United States government did not, at this time, recognize Native Americans as Citizens.

PFC Oklahombi, with 19 other Choctaw tribal members were the first "code talkers" for the U.S. Military and used the Choctaw language to confuse and stump the German army.  The success of the Choctaw Code Talkers paved the way for the future use of Native American languages (the Navajo and Comanche) to confuse enemies.


PFC Oklahombi is also considered to be Oklahoma's most decorated WWI soldier.  Earning a Silver Star and the Croix de Guerre, for his actions during the Meuse-Argonne offensive, where he almost single-handled captured 171 enemy soldiers.

After his discharge in June of 1919, he returned to the Kiamichi Mountains of Oklahoma, his wife Agnes and new son Jonas. He lived quietly farming, hunting and fishing until his death from an auto-pedestrian accident in 1960.

He was finally granted citizenship with the passage of the Indian Citizenship Act of 1924.

The Choctaw Code Talkers were rewarded, posthumously, for their actions during WWI on November 15, 2008, when the Code Talkers Recognition Act was signed into law by President George W. Bush,