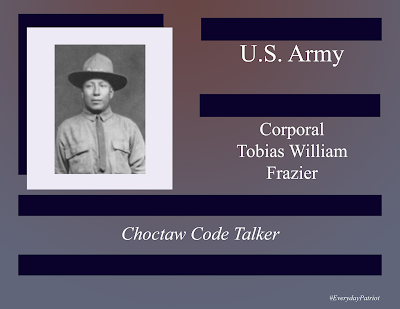 Corporal Tobias William Frazier was born in Sulphur, Oklahoma in 1892.

A football player, he played for Armstrong Academy until his graduation in 1917.

Enlisting in the U.S. Army during WWI, he was assigned to the 36th Division, where Corporal Frazier and other soldiers from the Choctaw Native American Tribe used their native language to confound enemy listeners.  Their actions helped break the Hindenberg Line.

After the war, Corporal Frazier returned to his native Oklahoma, nursing a wounded leg.