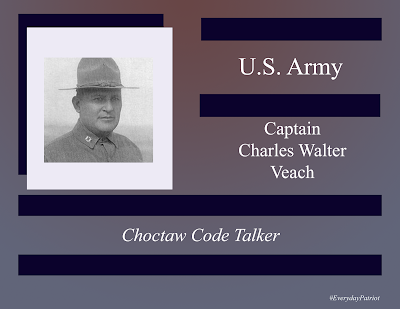 Captain Charles Walter Veach was born on May 18, 1884, in Caddo, Oklahoma.

During WWI, the Oklahoma National Guard was absorbed by the U.S. Army's 142nd Divison, where he and other members of the Choctaw tribe first used a Native American language to confound enemy troops and setting the stage for further Native American Code Talkers in the U.S. Military.

Captain Charles Walter Veach died on October 13, 1966, and rests in the Highland Cemetary of Durant, Oklahoma.