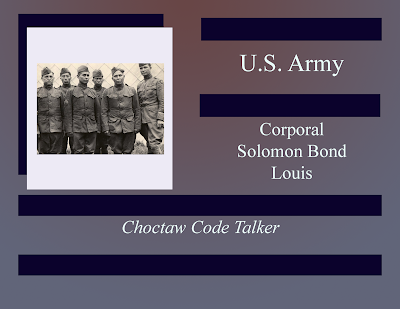 When the enlistment for WWI began, Corporal Louis lied about his age to enlist with his friends.  After training at Fort Sill, Oklahoma, he deployed to France with the 142 Infantry and became known as one of the Choctaw Code Talkers of WWI.

After the war, Corporal Louis returned to his native Oklahoma, where he worked as a peanut farmer as well as did carpentry.  He was also an active preacher and served as a Justice of the Peace.

He died on February 19, 1972, and rests at Homers Chapel Cemetery in Boswell, Oklahoma.

The first issue of a comic book series that was issued by the Indigenous Narratives Collection called "Tales of the Mighty Code Talkers" celebrates the actions of Corporal Louis and the other Choctaw Code Talkers.