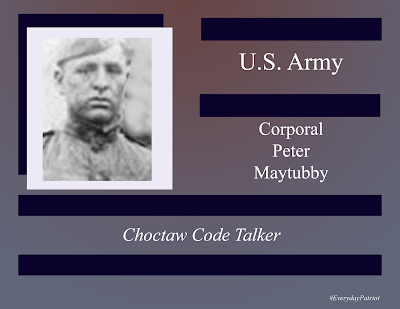 Corporal Peter Maytubby was born on September 26, 1862, in Reagan Oklahoma.

During WWI, he enlisted in the U.S. Army, assigned to the 142nd infantry, and deployed to France.

Corporal Maytubby and 19 other members of the Choctaw tribe were able to confound the wiretaps during the tail end of the war through the use of their native language, enabling the Army to withdraw two units undetected.

After the war, Corporal Maytubby returned to his small  Oklahoma farming community, dying on January 24, 1964.  He rests at Tishomingo Cemetery.